You are here: Home / Grief / The Many Stages of Grief

It has been 12 years since my husband died and I am still amazed at times of the intense feelings I have regarding my grief process.  While I was visiting my doctor for a checkup yesterday we discussed how far I had come and she was happy for me.  As I was leaving her office I happened to notice a display of doctors for the hospital and the cardiac-thoracic section caught my eye.  To appease myself, I looked to see if my husband’s doctors were listed and I when I saw one of the doctors listed, who was a resident at the time, was now a pronounced surgeon at the hospital, the rewind button in my mind kicked in big time.  When I looked at the picture of this prominent resident turned surgeon, my mind went back in time and I had to fight back the tears in the hallway as I recounted that terrible day on September 7,2005.  It ended up being a 12 hour surgery with the chaplain being at my side several times, along with my family and his.  My husband put off this major surgery so he could see his son start his first day of kindergarten and as our son sat in his first week of classes, we didn’t want him to know what his father was going through that day.  What was to follow for the next two years was a roller coaster of chaos for all of us. 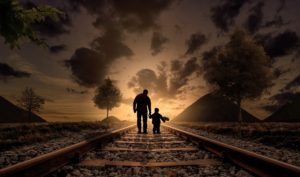 He passed away at home almost two years to the day later.  I had many mixed emotions before his death as I was placed under an extreme amount of stress surviving the unknown, taking care of our son, holding down a job as well as taking care of a very sick spouse.  I thought my life was going to be so much easier after his death.  Boy, was I wrong.  It just opened up a whole new set of issues to deal with, mainly our son.  I coped by being in survival mode, doing the best I could to make sure his needs were met.  I made many mistakes along the way.  I felt guilty for years of the things I had said out of anger to my husband.  When someone goes through a major surgery as he did, they are never the same again – physically or emotionally.  It is tough for everyone to handle and cope.

I read everything I could on grief and the book that helped me the most was written by Elizabeth Kubler Ross – On Grief and Grieving.  She describes the five stages of grief and I have found this to be true of anything we grieve – a pet, a spouse, a friendship, a family member, a job, a relationship.  There is a process we have to go through before we can move on.  And even after we have moved on, we will still have those moments when we hear a song, see someone from our past, going through a box of treasures from the past, that will cause an eruption of emotion similar to a volcano.

The truth is, there no “right” way to grieve.  You have to do what is best for you.  Feel what you want to feel.  Take the time you need to figure things out.  Be alone.  Listen to your inner voice.  This is your new normal and no one else’s.  Do not rush into anything.  Do not make hasty decisions at this time in your life.

A few years ago, if I had seen that doctor’s picture, I would have stayed in the rewind setting much too long and it would have ruined by weekend and the weeks ahead.  It has taken a long time to learn the coping skills to not let this derail me for an extended period of time.

After twelves years, I am just now starting to get my motivation back.  I have been through hell and back. I has to make some tough decisions on what I felt was right and what was best for me and this included cutting toxic people out of  my life.  It’s the best thing I have ever done for myself.

You owe it to yourself to do what is best for you.  Do You.  Be Tenacious.

Do you hate your child at times? If the answer is yes, then you must read this post! ... See MoreSee Less

How I Grew To Hate My ADHD Child - www.mytenaciouslife.com

**Please Note: This post contains referral links** All Sunshine and Rainbows! It was eons ago when I was so excited to be pregnant with our child! Having grown up with a bipolar mother, I had my parenting plan down pat and I was going to make sure my son would...
View on Facebook
·Share

If you have ever felt you hated your child at times, you MUST read my latest post on ADHD parenting!

How I Grew To Hate My ADHD Child - www.mytenaciouslife.com

**Please Note: This post contains referral links** All Sunshine and Rainbows! It was eons ago when I was so excited to be pregnant with our child! Having grown up with a bipolar mother, I had my parenting plan down pat and I was going to make sure my son would...
View on Facebook
·Share